Because of the current pandemy, a share of the world’s economy has literally been put to a halt. The marketplaces are hitting the ground and public gatherings of all kinds, are now being canceled or postponed. This is all happening right now, and it’s the same everywhere in the world.

So how about the seasonal Cannabis fairs and expos? Aiming for the Spannabis in a couple of days Le Cannabiste is proposing you a quick tour on what’s going to be canceled, postponed or about to be.

It’s quite sad really, that was a bit of fun. But even more that would give the season a pace, a balance between this one and the giant expo in Barcelona : The Spannabis Festival

On the same topic

As we did propose a poll on our social medias lats week, the audience was at half okay, to go to Spannabis this year, pandemy or not …

When it comes to the USA, the Coronavirus epidemic is building fast, so festival organisers have taken forward measures.

Natural Products Expo West, one of the largest CBD and legal Cannabis fair, was simply pushed further… postponed in April, without a clear new date about it for now.

In Tel Aviv, the great mass of the Cannabusiness is called Cannatech.

Dozens of innovations are shown each year, so every single company in the area is using it for meeting point in Israël. It’s also a playground for many brands coming from Eastern, Asia and the USA.

But this year Cannatech has been pushed back in June. The countdown was inflated with a few weeks, at least for now. But nobody can really tell if it will happen or not, since the epidemy has reached the size of a pandemy now.

Back in the USA, the ‘SXSW’ festival which stands for ‘South by Southwest’ was initially to happen, no matter what …

Then, facing the obvious situation and a large petition signed by more than 35 000 people online … The SXSW festival, a high place for Cannabis culture, was finally canceled at the very last minute.

This is the first time such thing happens, in 34 years.

As we went asking the French followers on Facebook, they were about 44% to declare : they would be going to Spannabis. ‘In a Safe Manner’ as we added.

As we were concerned about not creating a useless panics or discourage in any ways the audience, we haven’t spoke about it since.

But now the event is at the door, and so does the pandemy. So what is the current situation with Spannabis, as we are writing these lines?

First of all we have to mention the statement of a company called Mirales. It’s a marketing and consulting company that would attend to the Spannabis festival this year.

An influencing company who didn’t hesitate in writing to all their contacts with the following message :

Lately when it comes to Coronavirus, there’s a lot of media talks about France, italy, the USA … But what is it about in Spain shortly speaking?

The number of infected cases has just doubled over the last 24 hours. As we are speaking the country counts 28 deceased and 1204 people sick of this virus.

If there would be one graph to keep in mind it should be the following. 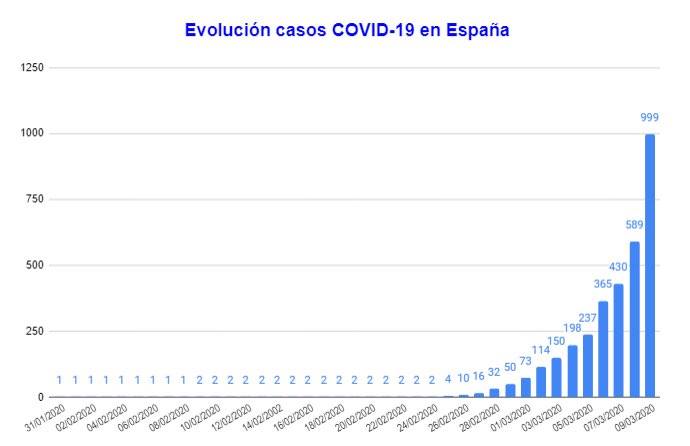 At last, when it comes to Spannabis we have to remind you the cancelation of a major event at the side of the festival itself.

The official opening of the major player : Plantasur had to be canceled out of precaution, because of the Coronavirus spreading.

It’s obviously not time for party and light considerations, containment procedures are happening all over Europe as we speak. The current situation is quite new really. And it requires our highest attention.

We’re perfectly aware about the stakes at play, it’s often a matter of survival for some of the companies who committed a lot to attend this festival. Now each and everyone has to take his own responsibilities for the matter to attend or not in Spannabis on saturday.

But our duty is to try and be helpful as much as we can here. So if you do have the choice, please try to stay home this weekend. The Cannabis industry is not going to stop for that much, but maybe with a bit of time the pandemy will.

Safia Lebdi’s manifesto : Us the women

Safia Lebdi is notorious for her feminist and anti-racist lay commitment, known as the initiator of the internationalization of the Ukrainian Femen movement. The former elected in Ile de France and founder of ‘Neither Whores [Read More]